V INTERNATIONAL FESTIVAL OF THE BALLET IN KREMLIN

From 22 to 29 September, the State Kremlin Palace traditionally held the International Ballet Festival in the Kremlin on its stage. 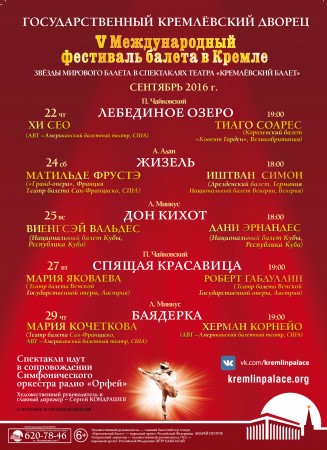 For connoisseurs of ballet art, a rich program of the fifth and jubilee Festival was prepared, which included the brightest performances of the Kremlin Ballet Theater with the participation of invited stars of the world ballet from the USA, Great Britain, Germany, France, Hungary, Austria, the Netherlands and the Republic of Cuba.

Producer of the Festival is the General Director of Globex Promotion, Honored Artist of Russia Aidar M. Shaydullin.

Within the framework of the Festival, eminent artists from different countries demonstrated their talent and unique technique to the audience by performing the main parts in the performances of the Kremlin Ballet Theater:

Today the theater “Kremlin Ballet” is the highest and most cherished culture of classical dance, it is a troupe with a unique creative face and original artistic handwriting.

This article was posted in Новости, Проекты. Bookmark the permalink. Follow comments with the RSS feed for this post.Both comments and trackbacks are closed.