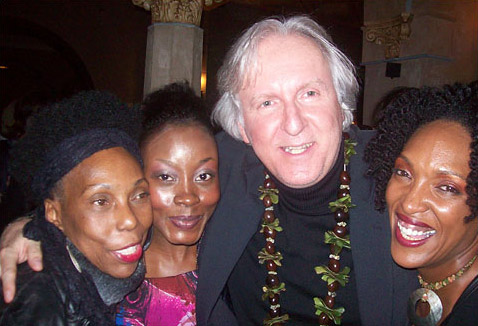 The choreographer Lula Washington, left, with James Cameron and the dancers Christa Oliver and Tamica Washington-Miller.

Until recently the Los Angeles-based choreographer Lula Washington did not use e-mail. Actually, she resisted most forms of technology. Her dance company had a Web site; Ms.Washington just hadn’t visited it. So it’s somehat interesting that a few years ago she found herself working with one of the most technologically innovative directors in Hollywood.

Ms. Washington, whose company is celebrating its 30th anniversary this year and will be performing at Peak Performances@Montclair beginning on Thursday, helped choreograph the ritual movement and body language for the Na’vi people in James Cameron’s blockbuster “Avatar.” Dancers in her company also helped provide motion for the characters through performance-capture technology. Ms. Washington, who grew up in the Watts section of Los Angeles, worked with Alvin Ailey and specializes in reflecting the African-American experience through movement. She speaks very softly, but her bright poppy-red lipstick hints at her feistiness and strength. Her new piece, “www.connections.2010,” which is having its world premiere on Thursday, is inspired by the ways people connect and expose themselves through social networking on the Web.

We talked to the choreographer at the Ailey Studios in midtown Manhattan about her experience working on the film. Here are excerpts from the conversation:

Q. When were you first approached about working on “Avatar”?

A. In Los Angeles, late ‘06 early ‘07. I was invited by James Cameron to come to his office for a meeting. There were three or four other choreographers invited. In the end of the interview, he talked about his project and this alien nation of eight-foot aliens that would be blue people that would have a tail. It was called “Pandora” at the time.

Q. What did you think of all this?

A. Well the tail, I was not too sure. I said, “A tail?” He said, “Yeah, they’re going to have a tail,” and I said, “How long will it be?” And he didn’t know exactly how long it would be. I was skeptical about the tail idea the whole time.

Q. What else did he tell you about the project?

A. He talked to me about what his vision was about this alien nation and how they would live on this planet and he wanted them to have their own culture and he wanted them to have their own rituals and their own ways of greeting and own ways being intimate with each other and walking and sitting. He said, “Well, these characters are eight feet tall, how would they sit?” So we actually got down on the floor in his office and sat in different positions.

Q. What other aspects of movement did you help him with?

A. We played around and he said, “How will they communicate, how will they talk?” He wanted signs — he didn’t want to use words all the time. I do a lot of yoga and things like that and was thinking about the chakras and the third eye and I said, “Well, why don’t we use the third eye?” Then I said, “Why don’t we take your hands and go like this [Ms.Washington demonstrated stretching out her arm in front of her with her fingers pointed], meaning that I see you, I know you, I see that you’re there, and you wouldn’t have to say anything because they would just know.” 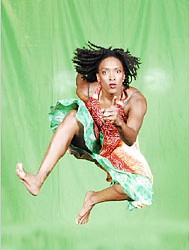 Ian Foxx, Tamica Washington-Miller in “We Wore the Mask.”

Q. What happened next?

A. I didn’t hear from him for a while and so I figured I didn’t get the job, and then he called us and said he wanted us to come in and to bring some dancers and play around. So the dancers put on these body suits with the little things on them and they moved around. Originally, I was only supposed to create two works and then I would get a call like every other day: “Lula, there’s another scene, can you do that?” He always had somebody call me up and tell me to read this part of the script, and I would get the idea. I ended up creating about five, what we would call, ritual ballets or dances. He wanted one for the celebration for the hunt, which is traditional in aboriginal cultures. And then he said we needed a funeral ritual and a mating ritual and then we need a healing ritual.

Q. Why do you think he wanted you in particular to work on the movie?

A. The reason that he called me is I do works that are ritual-oriented. He said: “I know you know that I can’t put a 20-minute ballet in the film. I know you’re known for that.” But I still needed it to have a beginning, middle and end, so I created these pieces that were very long and it ended up being better for him, because he had more material and he could always go back and draw from it. I wanted him to have plenty of information. The wonderful thing about James Cameron was he really liked having the dancers on the set and he respected us and what we do, and he allowed us to continue our touring and he worked around our touring schedule because we weren’t in a position to give up our tours and our contracts to do it. 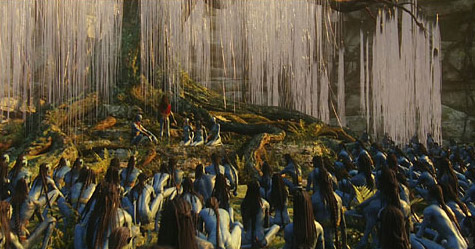 20th Century Fox Na’vis in a scene from “Avatar.”

Q. Which of your scenes ended up in the film?

A. The ritual parts where they’re praying at the end, when they’re trying to heal Grace, and the part where Neytiri does that jump with the bow and arrow — that came straight from the hunt scene — so there are plenty of places. And when Jake is taken into the village I had to do a vision quest where multiple Na’vi lay their hands on Jake. My husband said, “Brace yourself — they cut out all the movement.” And I said, “Well, those things happen,” and I saw the movie and there was a lot of stuff in there.

Q. As a modern dance choreographer, do you like working with the movie industry?

A. I really enjoy interacting with Hollywood. I’ve danced in movies and films. The good thing that I like about it and hope is that it really helps to bring more income in for modern dance companies and it gives modern dance companies a way of maintaining their dancers, especially if they use the whole company. It opens more opportunities for choreographers. I think a lot of people don’t think that a modern dance company can do certain things, so I’m so grateful that Jim had a vision and he had seen and heard about us and all the ways that I work. I feel like if you’re a modern dance company, you can do anything. I think Jim wanted to be a dancer in one of his other lives.

This article was posted in Проекты. Bookmark the permalink. Follow comments with the RSS feed for this post.Both comments and trackbacks are closed.